G'day - My name's Jason. I'm from Townsville, Australia & I've been playing Pinball since 2015.

There were only a handful of places you could play Pinball growing up where I live. My earliest memories of Pinball were of a Twilight Zone at the Minigolf back in the 90's, then again at a small arcade next to a movie cinema in the early 2000's where they had Guns n Roses + others. In 2007, me and some mates were grabbing food near this arcade & saw they were closing down and were auctioning off all the games. We didn't have enough money for the pinnies but we did have enough to buy Gunblade NY - a 90's sega 2 player shooter. It cost us $700 which we split between the 3 of us. We played it non stop over the weekend and that was the end of that. After a few years this game migrated its way to my house where it sat (and still sits now) broken from transit.

Fast forward to December of 2014, my Youtube randomly starts suggesting me arcade tours , pinball tournaments & tutorials. The first videos i remember in particular were Johns Arcade 1UP Bar Tour & a PAPA World Championship Qualifier. What stood out to me was the commentary during the Qualifers. I couldn't believe there was so much depth and strategy to Pinball. I instantly drew a connection to Magic the Gathering, which is another niche hobby I play - with a worldwide following, cards that are rare and expensive, high stakes tournaments & in depth strategy. I also couldn't believe that so many people had such a large collection of expensive machines. It seemed crazy to me at the time. I don't know if any of you have seen the Tetris Classic championships on Youtube recently, but that had me hooked in a similar way - exciting, in depth commentary.

After watching videos night after night, i decided enough was enough and started to look for my very own machine to buy (keep in mind i hadn't played a machine since i was a kid). I googled 'Pinball Townsville', and managed to find someone nearby that restored and sold machines. I drove to his house and saw a room full of machines - I was like a kid in a candy shop. He only had 2 machines for sale at the time - an Avengers Hulk LE & a Bally KISS - we played them for ages and from memory i think i remember being slightly dissapointed with overall gameplay as i'd been watching too much Bowen Kerins. This didn't stop me however. I've always been one to enjoy hobbies I could play and research without others around to guide me - i enjoy figuring it out as I go. After months of searching, i settled for a Tales from the Crypt off EBAY for $3500 AUD including shipping. I didn't really care if this was a good price, I just wanted to start my Pinball journey.

In the beginning i think i liked the look of it more than the game itself. It was fun, but i sucked (i still suck now to be fair). I ended up grabbing a Super Mario Bro's about a month later, followed by a WWF Royal Rumble. Still wasn't impressed. Then i found a Lord of the Rings - this game had my attention. Not only was it by far my most expensive purchase, but the progressive rule-set made me want to become a better player - i was finally starting to understand the game.

I own a hippy/piercing/psychic shop in a busy shopping centre where I live. In April of 2015 I decided I was sick of looking at the vacant space opposite my shop & opened up a hybrid Collectables/Pinball/Arcade joint called WZRD Collectables & Retro Arcade. This place was a hit - Townsville hadn't seen anything quite like it. Due to unforeseen events, the shopping centre kicked me out of this space after 6 months. This was a hard hit. I'd overextended into this venture & couldn't stop now. I continued this business outside of the centre but it proved too difficult & costly. By now i had amassed about 13 Pins and 10 arcades - but i was also flat broke. I gave it one last Hoorah in 2016 but ended up getting robbed twice in 2 months, the final nail in the coffin - RIP Wzrd. 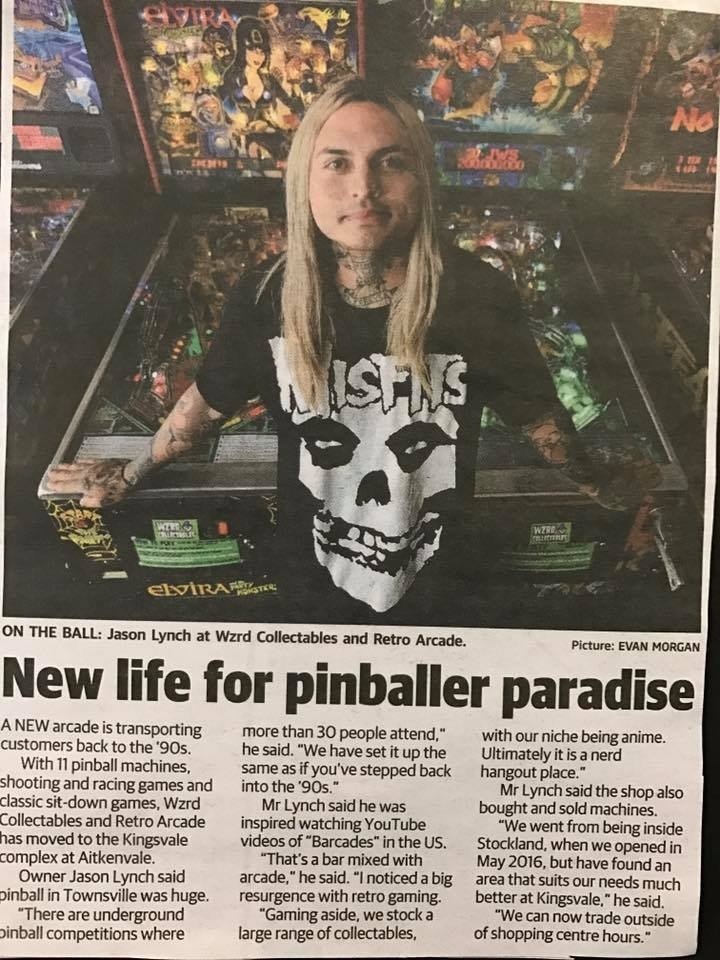 I attempted to put any machine I could into any location I could - a trendy local pub, a jazz bar & the last video rental store Townsville would ever see. It wasn't until Christmas, when our local newspaper had their staff party at the jazz bar. The 4 Pinball machines we had down there (this place is in a 20 stair basement) were set to free play for the party and were the centre point of the event. This started a strategic partnership between myself & the venue manager. in 2018 we transformed this into Townsville's first Bar Arcade; Empire Alternacade - a double hit of nostalgia with the games + 90's grunge atmosphere.

Fast forward to today. Empire is kicking strong, with a second location heading to Mackay (4 hours south) in a weeks time - we are one of Australia's few Stern Army locations with a great league and community. I have a Pinball / Skate influenced clothing brand (Pinhead Australia) & stream with mates once a week. My partner & I had our first son 2 days ago - another Pinhead in the making. Our monthly league is tomorrow so I better head down & tune up the machines. Thanks for listening. 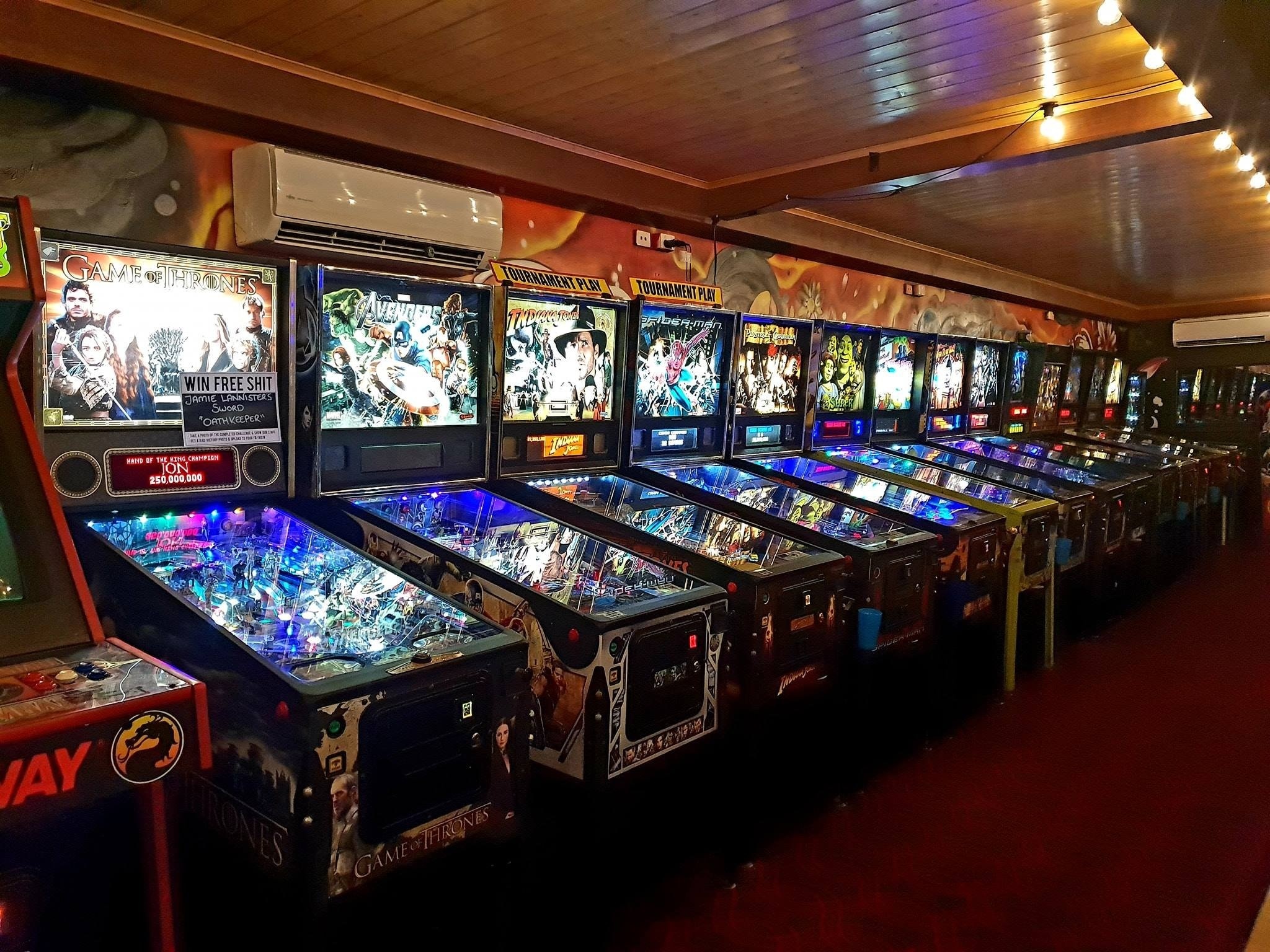